The most popular attraction in Bolivia is the Salar de Uyuni and it is considered one of the natural wonders of the world.

As one of the top attractions in South America it is on many a travelers bucket list and the stunning landscapes the area contains  are a  photographers dream.

What exactly is the “Salar de Uyuni” anyway?  The word “salar” in spanish means “salt flat” and Uyuni is the name of the city close to the edge of the salar that gives it its name. It is the worlds largest salt flats and has a surface area of over 10500 km2.

The formation of the Salar de Uyuni was due to the drying up of ancient high altitude saline lakes that left a crust of salt that varies in thickness up to about 10 meters depth.

Below that surface layer there are still pools of salt water and during the rainy season the water table below rises.

This can result in a layer of water that sits on the surface of the salar and that produces an incredible mirror effect.

Most people that visit the Salar de Uyuni will take an organised tour with a number of options being available.

The most popular options are 1 Day tours and 3 day tours.

The 1 day options visit the salt flats themselves and the nearby attractions whilst the 3 Day tours visit additional places like high altitude colored lakes, hot springs, thermal geyser fields, rock formations in the desert and pass by some spectacular scenery.

For information about Tours and the best Salt Flats Companies

check out our SALT FLATS TOURS page for full information.

Here is a list of the best things to see and do in the Salar de Uyuni and surrounding area: 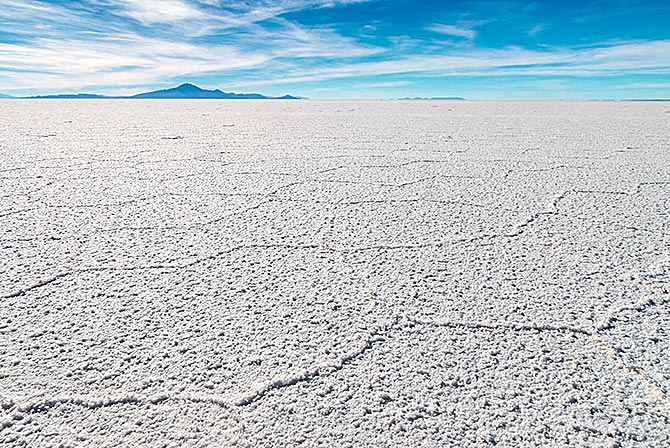 This is the highlight for most people and exploring the blindingly white salt desert , with its honeycomb patterned surface, is unforgettable.

The area is so vast and flat it is one of the few places on the planet that you can detect the curvature of the earth with the naked eye. It can feel like another planet.

Sunglasses & sun cream are essential as the high altitude sun (it is located at around 3700m / 12140 feet) reflects back of the glaring white surface very strongly.

Some of the favorite things people like about their visit to the Salar de Uyuni are: 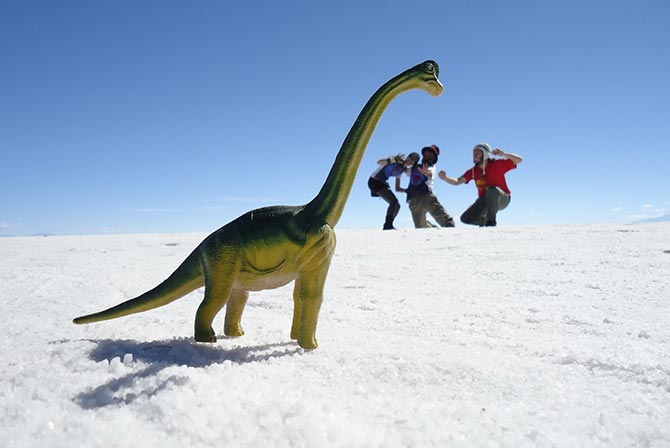 The salt flats are famously known as the best place to take spectacular perspective illusion photos.

Taken from a low angle  with the foreground subject close to the camera and the background subject (usually people) many meters way, it is easy to create the effect.

Google Uyuni perspective photos for inspiration and with some forwarding planning you can bring some creative props to make your own instagram master piece.

Or really get your creative mind working and make a video – the possibilities are endless!

All tours will allow time for you spend taking photos and often the guides can quite skillful at the trick photos! 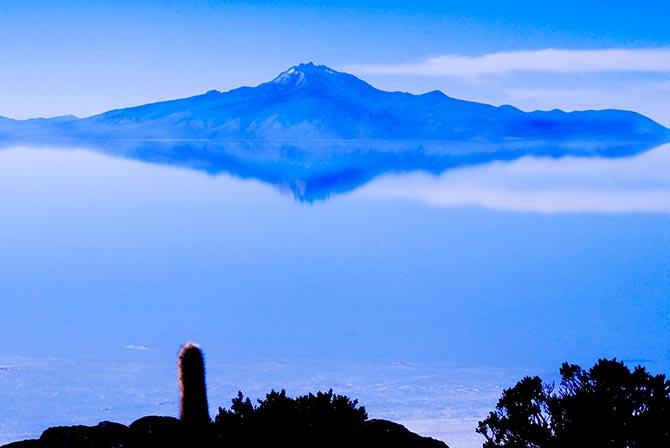 At certain times of the year , after there has been a period of consistent rainfall, the water table below the Salar rises and a layer of water remains on the surface of large parts of the salt flats.

This produces the famous “Mirror effect” were by the sky is reflected in the water below producing a heavenly illusion.

Driving across the Salar at this time can seem like you are flying and this many people try to time their visit to Uyuni to give themselves the best chances of seeing salt flats like this.

The most likely time for this to happen is from Jan through to April which are traditionally the wet season months with the most rainfall BUT there are no guarantees.

Weather is getting  more unpredictable each year. This year 2018 for example, there was not so much rain Jan through to April  but there was lots in July and August which are supposed to be the driest months of the year! So it was possible to see the mirror effect in August but that of course is not the norm. 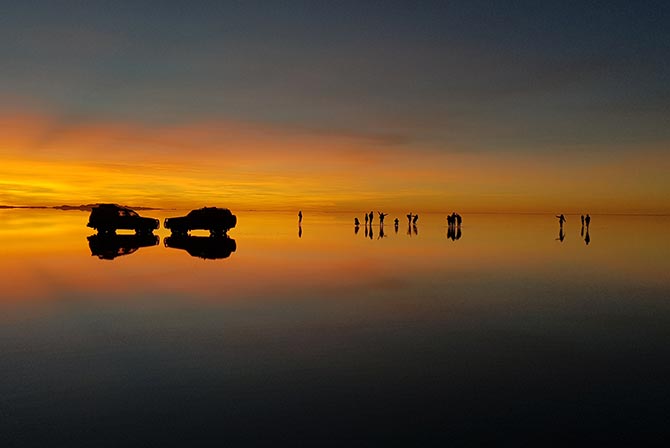 It is possible to see some of the most  incredible sunrises and sunsets on the salt flats. Seeing the orange hues stain the vast whiteness of the salar gives the place a whole different atmosphere.

When there is water on the salar the mirror effect can enhance this show of colors even more providing the backdrop for some stunning photographs.

Some tours include time to watch the sunset on the salar at the end of the first day but some do not so you have to check.

Most tours do not include sunrise watching as part of the schedule and this is usually done as part of a private tour that leaves early morning from Uyuni. 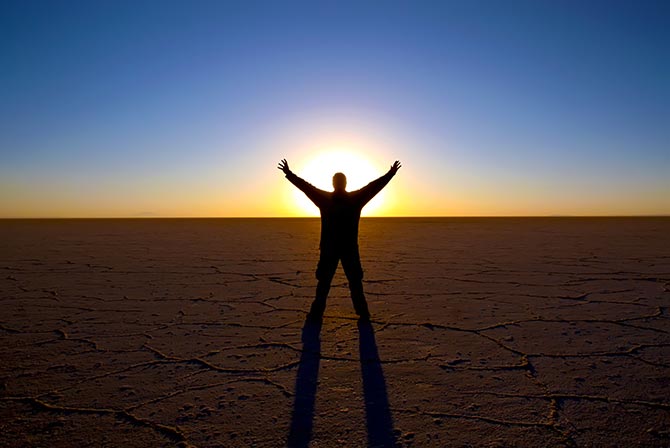 There are also private tour options to just watch the sunset leaving Uyuni late afternoon and returning in the evening.

The reason there are not daily scheduled departures for sunrise and sunset tours is that there are usually not enough people to make up full groups but sometimes you can get lucky. 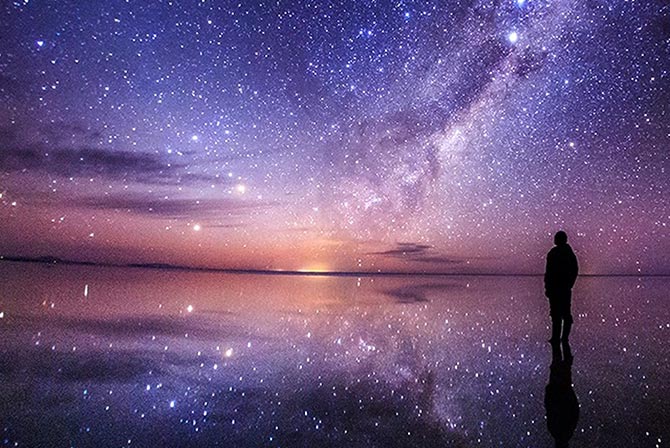 When the skies are clear above the Salar de Uyuni it is possible to see a large quantity of stars.

This is due to the thin high altitude air and lack of air and light pollution.

This is another experience that can be even further enhanced if there is also the mirror effect.

Star Gazing has become a popular niche tour that some companies offer when the conditions are suitable.

Again this is usually a private tour option only leaving late evening and returning after midnight. 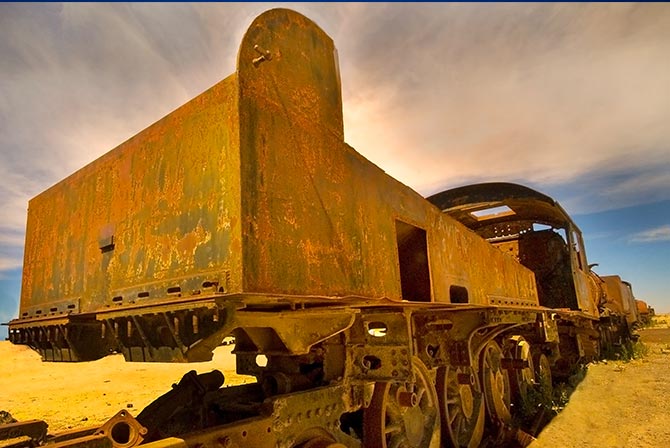 A short drive out side of the city of Uyuni lie a “graveyard” of old rusting trains which are surprisingly photogenic.

Leftover from years gone by when Uyuni was a profitable mining transport hub and the British built railway lines were thriving these mechanical ghosts of the past give a glimpse into a more prosperous time for the area.

After the mining industry of the area collapsed they fell into disrepair and have remained there ever since with noone really wanting to pay the costs of removing them.

People are free to climb on the rusting train cartridges and there are no controls. This unfortunately means that some idiots think it is ok to sprawl graffiti all over them. 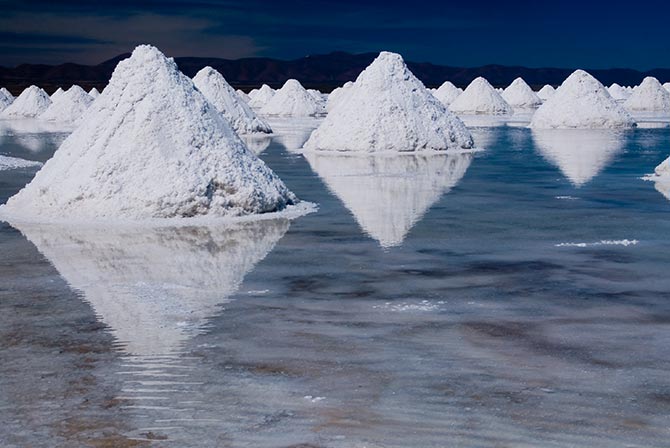 On the edge of the Salar de Uyuni is a small town called Colchani whose principle activity is the processing of salt. On the salt flats nearby salt is scraped into mounds to partly dry and then loaded onto to trucks.The trucks then bring the salt to Colchani  where it is treated and cleaned before being bagged.

Tourism also brings income to the town and it is home to some impressive salt hotels (see below) as well as having a small salt museum. 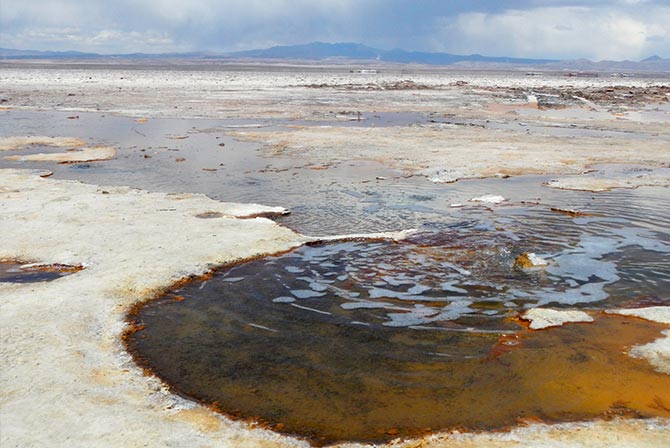 A short way into the salt flats is an area called “Ojos de Salar” which is translated  the “Eyes of the Salt Flat”.

Here you can witness water bubbling up through crevices in the crust which looks like it might be geothermal and hot but in fact is cold water.

In recent years researchers discovered a  special kind of PHA biopolymer in these waters. We are not scientists but basically they can be used in the creation of plastic instead of the usual synthetic polymers. This could mean a more sustainable and biodegradable type of plastic. Read more about it in this article

Hotels Made Purely From Salt 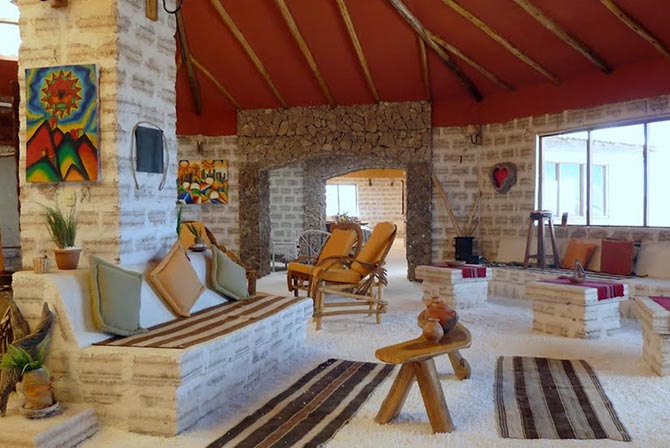 With such an abundance of salt then it only makes sense to use it as a construction material.

This has resulted in several hotels in the area being built purely from salt.

The first salt hotel was directly constructed on the Salar de Uyuni but due to contamination concerns it had to cease taking guests many years ago. It can still be visited as a museum type attraction now during the tours.

There are still plenty of salt hotels that have been constructed on the perimeter of the salar ranging from basic style ones used in the standard tours to some impressively fancy constructions (with price to match).

Some of the better ones are located in Colchani with Luna Salada and Palacio de Sal being popular options. 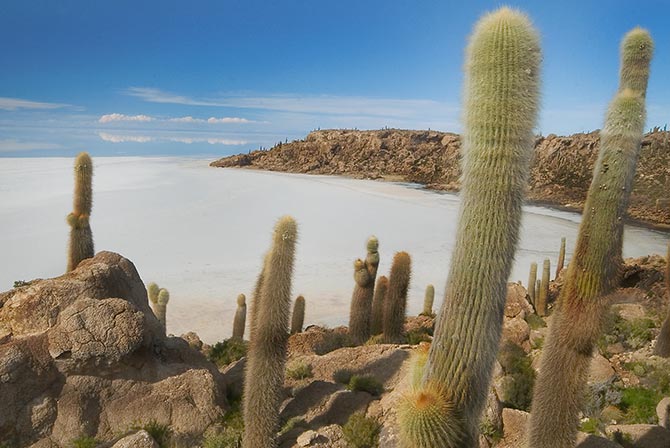 Isla Incahuasi is also often referred to as “fisherman’s island”. There are various stories about this but most will say it is because its reflection resembles the shape of a fish.

It is one of a few islands in the middle of the Salar de Uyuni and is a popular spot for the lunch breaks during the tours.

You can explore the island in 30 or so minutes and it offers a different view of the salt flats  all around.

The island is home to some impressively large cacti with some growing over 10 meters in height. 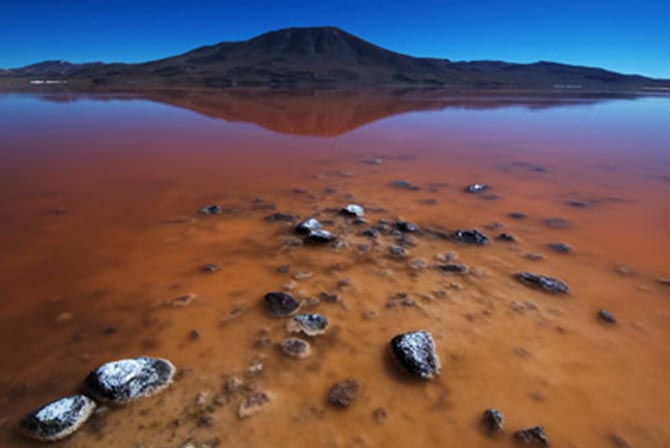 The red colored waters of Laguna Colorada are due to the waters containing  certain algae and some colored sediments.

When the water churns and then settles the colored effect can be very strong.

The lake is home to large flocks of flamingos of which there are all 4 species living in the area. 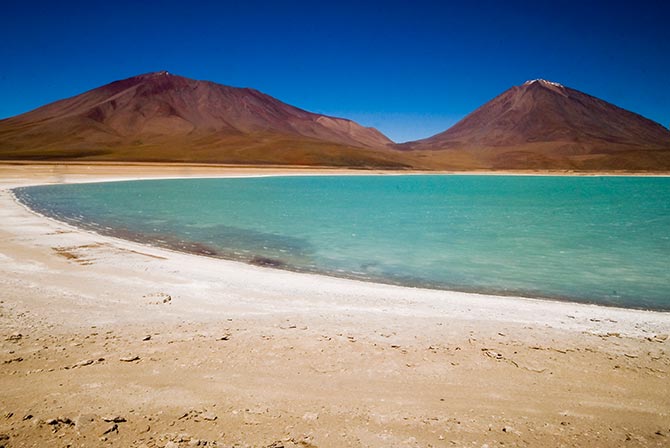 Close to the border of Chile the green lake called Laguna Verde lies below the volcano Licancabur.

When the wind disturbs the lakes water it can become emerald green in color. If the waters are calm then  a wonderful symmetric reflection of the mountain can be scene.

It is from just beyond here that the prearranged transfers to San Pedro de Atacama in Chile meet with the transport. 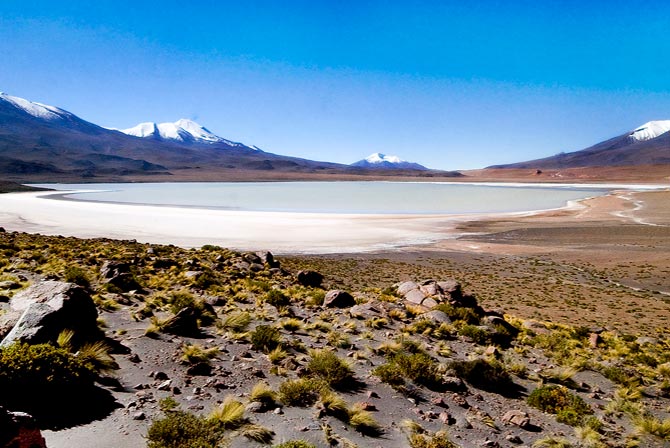 These 3 salt water lakes are located along the southern route taken towards Laguna Colorada.

One or more are often visited and used as a nice driving break after the long hours in the 4×4.

Each of them can be home to flamingos with Cañapa usually having the largest amount.

Laguna Hedionda is translated as “stinky lake” and is so called due to its sulphurous smell.

Laguna Honda can get incredibly windy so a good jacket is a must. 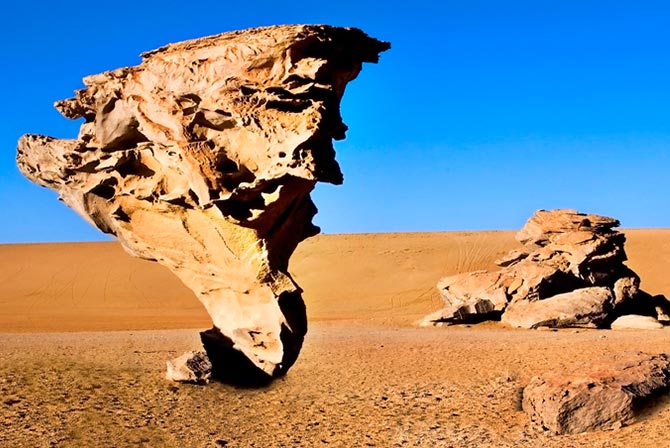 The Tree of Rock is a fascinating rock that has been eroded by thousands of years of desert winds.

The resulting formation resembles the shape of a tree and it looks like it should not be standing upright at all.

It is a delicate structure and you should make sure you do lean or climb on it. Due to such issue there are not signs warning people.

The early morning is the best time to visit the Sol de Mañana geothermal field.

Here you can see boiling hot pools of bubbling mud and the smell of sulphur is strong.

You will also see jets of hot mist ejecting into the air as high as 50 meters which are not in fact real geysers but are releases of pressurized steam. 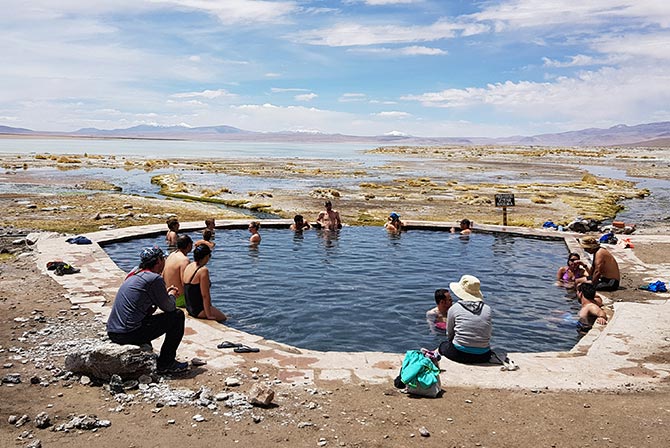 The hot spring are a welcome relaxing break during the 3 day tours and offer the best chance of a good hot bath.

Some tours visit during the nighttime so you can sit and watch the stars. Most tours take you there after the early morning Sol de Mañana visit.

The waters are around 35C and have a high mineral content that is relaxing for the muscles.

12 Of The Best Things To Do In Bolivia

We hope you like the article and it has made you want to visit the Salar de Uyuni and Bolivia.

Money Tips – For Traveling In Bolivia

Altitude Sickness: How to Deal with it

Inti Raymi, or the Sun Festival