Money Tips – For Traveling In Bolivia

If you’re planning a trip to Bolivia you will no doubt at some point think about your travel money, what to bring (or not bring) or what methods or currencies can be used when your there.

Bolivia is not as advanced as most countries in the areas of banking, payments and currency exchange and many people get caught out or frustrated because of this.

Read through the following advice to make sure you know what to expect and you are prepared correctly.

The exchange rate of the Boliviano to US dollar has remained quite stable for a number of years and at the time of writing 1 USD was worth around 6.9 bolivianos (mid market rate).

You can check the current USD to BOB rate today on xe.com

Currently issued coins and notes are as follows :

In 2018 the government started to release new notes to release the old versions and at the time of writing the 10bs note had just been released.

These new notes will have “Estado Plurinacional de Boliva” (Plurinational State of Bolivia), which is the official name of the country since the new constitution in 2009,  printed on them as opposed to just referring to the country as Bolivia.

The new notes at first glance seem to be a bit more durable and will hopefully mean we will soon see the end of the filthy notes in circulation currently which, in particular the 10bs note, are nothing short of a health hazard. 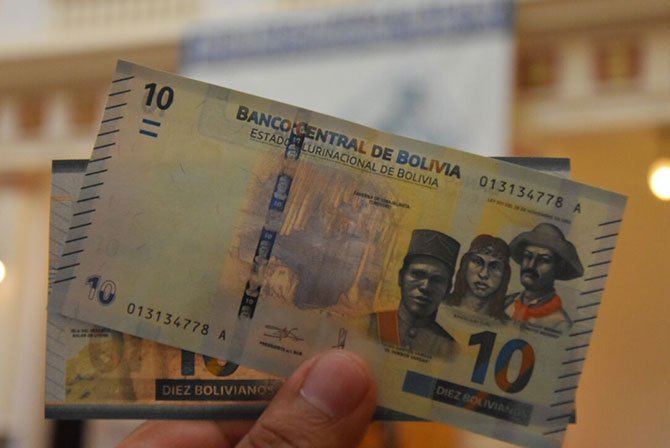 What About These Pesos I Keep being Asked For?

It should be noted that when in Bolivia it is not uncommon for people to give you prices in “pesos” or “pesitos” which you should simply take to mean bolivianos.

This is a throwback to when the  currency was called peso boliviano and it has stuck in common language throughout the years, probably because its easier to say!

How can I get Bolivianos before coming to Bolivia?

It is extremely difficult to get Bolivianos in advance before travelling and is only usually possible in neighboring countries such as Peru or Argentina and even then on usually in the areas close to the border and at bad rates.

Do I need to Get Bolivianos Before Coming to Bolivia?

Luckily no. If your arriving by air into La Paz or Santa Cruz airports there are currency exchange facilities and ATMs in the airport, so you can simply exchange or withdraw some BOB upon arrival.

If you are coming into Bolivia across the land border from Peru or Argentina then you can easily exchange USD to BOB in the border towns once you have crossed (Desaguadero, Copacabana, Villazon all have plenty of money changed).

Don’t change much though as rates won’t be the best and you will get better when you get to major towns or cities.

TIP – do bring plenty of small denomination US Dollar notes with you from home to give you maximum flexibility in changing but also because many places will accept payment in USD smaller notes albeit not always at great rates.

What type of currency should I bring to exchange?

Easy answer and that is bring US dollars to exchange. It is the only foreign currency that is widely accepted and easily exchanged.

Canadian dollars, Australian Dollars, UK Pounds will be extremely difficult (next to impossible) to exchange and if you find away it will be a terrible rate.

Even Euros, which you might have a bit more luck with, are going to be problematic.

Exchange or use all your Peruvian Soles, Argentinian or Chilean Pesos before crossing the border as you will only get bad rates in Bolivia when exchanging unless you manage to change with a fellow traveler going in the other direction.

IMPORTANT – Make sure all your US Dollar notes are pristine and in good condition as you will find any badly conditioned notes or any with rips in, even surprisingly small rips, will often not be accepted.

This might seem strangely fussy, especially when you see the state of some of Boliviano notes, but its simply due to the fact the banks will not accept them.

Bolivians know this so obviously can’t take notes that will be of no use to them.

In major cities there are plenty of ATMs as to be expected but in smaller towns there are often not – don’t presume there will be and travel without cash.

Also, even in some places like Uyuni or Tupiza, where there are ATMs , it is not uncommon for them to run out of cash or not be working.

Many a traveler gets caught out arriving in Uyuni for a Salt Flats Tour and has trouble getting money out for the entrance fees for the tour – always try to plan ahead when in the bigger cities.

Although little by little ATMs are beginning to arrive in smaller places they are often not from the major bank networks and foreign cards are often rejected by them.

Even worse is that there are plenty of stories of cards being retained by these ATMs leaving travelers in a sticky situation.

There is a limit to the amount of money you can take out from a Bolivian ATM and the amount changes depending on the bank.

Some of the smaller ones limit you to about 1500bs whilst the larger ones can allow up to about 6500 (around 950usd) per transaction.It can depend on your own bank aswell so you will have to experiment but if refused a larger amount you might want to try a lower amount.

The best banks to try are  BCP , BNB, and Banco Mercantil Santa Cruz. Then probably Banco Union is best option after those. 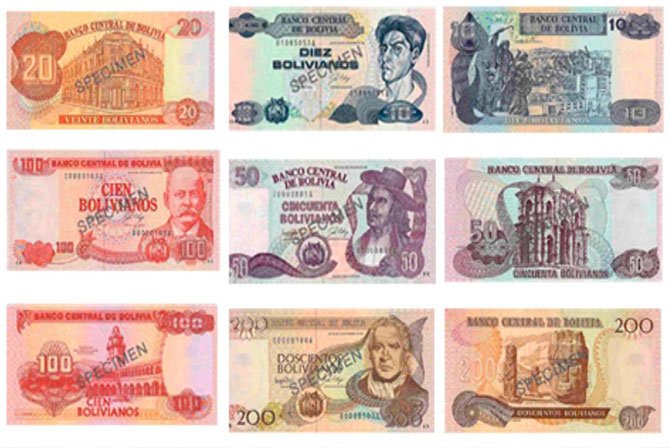 You will find money exchange services in every city and most towns. These can often give better rates than the banks so it is worth checking them out.

It is best to stick with the ones that look reputable when ever possible and have professional looking offices. You will also find street exchangers that will try to hawk their services as you pass but these should be used with caution as some are untrustworthy.

Whilst paying by card is the norm in many western countries it is far less common in Bolivia especially outside of the cities.

Many midrange and higher hotels, restaurants and stores will accept cards but will usually charge a service fee for doing so. This is because merchant service fees are high, often the payment is taken in USD and there is an additional banking charge for all USD transactions plus, and this is the less admitted to reason, all credit card transactions pass through the tax system so merchants will have to declare them and pay tax (you will find very few travel agencies accept credit cards for this reason! Kanoo Tours does though.).

Whilst support for Mastercard is getting better Visa is far more reliable. Maestro is accepted but can be problematic.  Ideally you should bring multiple cards if you can from different issuers to cover yourself.

Whilst it is possible to change travelers cheques it is not something that has ever really been popular in Bolivia.

It can be more trouble than its worth, meaning long queues in banks, copies of passports and changing requirements usually leaving tourists wishing they hadn’t bothered and just stuck with ATMs

Whilst issues with fake money in Bolivia have been decreasingly over the years it is still something to be vigilant about.

Unfortunately, it is harder for a visitor to Bolivia, being unfamiliar with the currency, to spot fakes and additionally there have been some very high quality fakes produced making it even more challenging.

Thigs to look out for are :

In general Bolivia is not a dangerous place to travel and usual street smarts will serve you well.

Its always good to have a few tips and reminders though! Hope they help …..

We think we have covered most of the common questions and concerns but if you can think of any more let us know in the comments and we can answer  or update the article with the info.

Gluten Free Travel in Bolivia in 2018